Works start to re-render the Chancel

We have just begun a very exciting project to re-render the chancel and nave crossing wall.

Having convinced everyone including Historic England and SPAB that the chancel had been rendered we also managed to persuade the DAC and Chancellor in order to obtain the necessary Faculty consent. In addition we also had to obtain planning permission which seems a bit unfair as there was no doubt the flint rubble walls of the chancel had been rendered. In fact there is clear evidence that the entire church was originally rendered.

Fortunately the Church Commissioners, who have the liability of the chancel, also saw the merits of reinstating the render for the long term protection of the fabric.

However, not only will it protect the fabric it will improve the internal environment for everyone who uses the church.

Although this may seem radical intervention, we feel it is very important to reinstate the traditional lime finishes to our churches if they are to have a viable future. 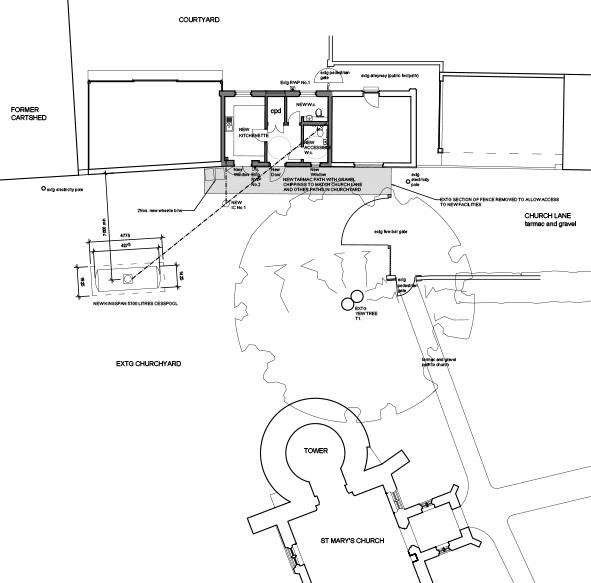 Planning permission and listed building consent has just bee received to convert an adjacent building to the churchyard into new facilities that will serve the church and the village of Bartlow.

An arrangement has been reached with the owner next door to convey ownership of what was an old stable to the church.

The conversion will provide a new kitchen and two new toilets, one of which will be accessible. New openings are to be formed into the rear boundary red brick wall, directly onto the churchyard. These have been designed in a sensitive traditional manner in solid timber joinery.

The PCC are now in full fund raising mode to raise the necessary funds to bring the scheme to fruition.

St Mary’s is a beautiful Grade I listed church dating back to at least the twelfth century. Unusually it has a round tower, and inside you will find some impressive medieval wall paintings.